Can NFT be Copied? Detailed Clarification 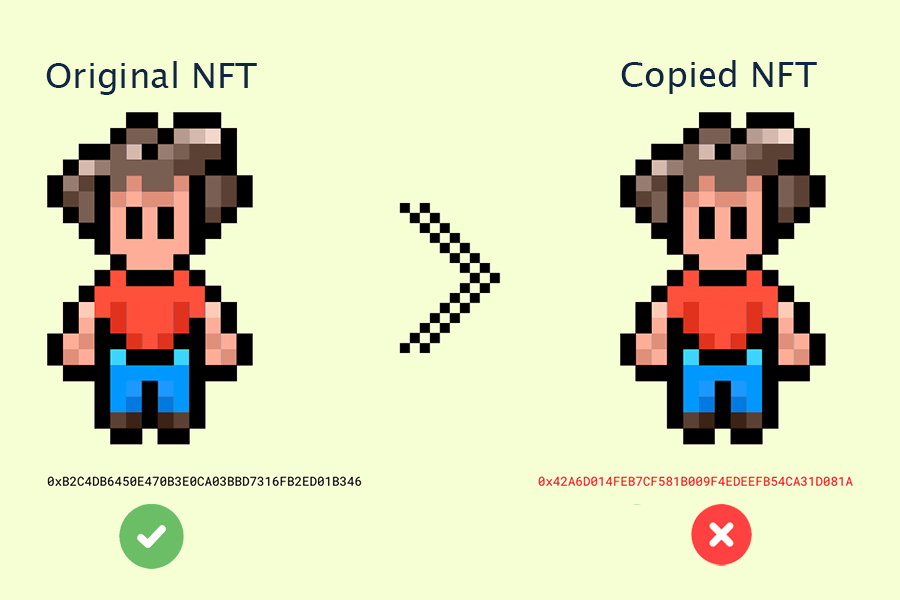 The NFT Technology is in early stage and there are quite of lot of scope to improve. Since it is based on blockchain everyone is sure about it cannot be tempered or hacked but can NFT be copied? This is a very serious question as people seldom make fun of the pictures and there are scams going on everywhere.

The answer is very simple, NO, but we have to understand things around it.

Contents hide
1 What is NFT?
2 So, Can NFT be copied?
3 The artifact of an NFT can be copied
4 Blockchain can’t be copied
5 Same artifact can be minted multiple times
6 The copyright dilemma
7 Minting NFTs of copyrighted material is illegal
8 The Conclusion

Non-Fungible Tokens or NFTs are blockchain tokens that are not identical and are specific to certain things. Unlike currencies which are fungible, non-fungible tokens cannot be replaced by other assets of the same type. For example, a car is non-fungible and a gold coin or any other currency is fungible, now if you take the car with it’s number plate then it becomes non fungible because there can’t be one more can with that same number.

Ethereum, the first blockchain platform defines a “non-fungible token” or NFT in ERC-721 standard of smart contract as a unique token that cannot be replaced by another indistinguishable token, in other words each NFT is a unique token which is non-fungible in nature and cannot be replicated in the blockchain and replaced by anything else. This is the factor which makes it desirable and eventually valuable which could be appreciated by time.

So, Can NFT be copied?

This is the first obvious question that come to our mind when we read that a NFT is unique that Can you copy NFT ? or Is it possible to copy an NFT? Here is the answer.

The NFT cannot be copied. When someone creates an NFT of the same artifact that someone else has already created, then it actually creates a new token in the blockchain, which is different from the original. The original NFT has no effect on this and it will retain its value, rather the copy makes the original more desirable and might appreciate the value.

Fun Fact, when we buy or mint an NFT, we actually buy or mint the token which points to the storage location of the digital asset. We don’t buy the content or the artifact.

The artifact of an NFT can be copied

Copying an artifact like a jpeg of an artwork is as easy as downloading a picture from a website by right clicking on a picture and saving it to your computer, anyone with a device and internet connection can do it. This is the biggest controversy in the NFT world about how easy it is to copy.

For Example, deepak.eth (twitter link) bought CryptoPunk #5822 (one of the 9 aliens out of 10000 CryptoPunks) in 8000 ETH which is roughly 23.7 million USD at that time, but anyone like you and me can copy the image and share it in social media without spending a single penny.

We have seen such trolls that someone buys an NFT at a huge price and shares it on twitter and someone else shares the same image in the comment section. However, this doesn’t mean that the troller own the image, the original owner would be the person who bought the artifact, deepak.eth in this example is and will always remain the owner of CryptoPunk #5822 until he sells it to someone else.

The interesting question here is, what if someone downloads the image from the original image and creates it’s NFT?

Although no one is going to stop you from doing this, it would be called a scam and the copied NFT will never contain its characteristics or value. For example, you can buy Van Gough’s The Starry Night from any small art store at a very cheap price and hang it in your living room but the original The Starry Night is and will always be owned by the original owner.

Please be aware of scams while buying NFT, validate the owner of the NFT and check the characteristics of it etc… before buying it. NFT is in very nascent state right now and the technology has not evolved to the extent to stop this from happening

NFT refers to a block in blockchain which is tightly embedded to the blockchain for good, there is no way to alter the blockchain, refer to this page if you want to understand how NFT works. The widely used NFT platform Etherium uses the blockchain technology and it guarantees that the block can never be altered. Everything in blockchain is permanent.

The blockchain is basically a distributed ledger of a chain of transactions, which is stored in every wallet owner’s computer (when you create a wallet using a third party provider like coinbase then the coinbase network contains the whole ledger). The chain of transaction keeps the history of an NFT since it is minted and all the transactions occurred related to the NFT.

Advancement of technology in the NFT world is one of the reasons behind the popularity of NFT. Ethereum, the blockchain platform, defines the standard of Smart Contract ERC-721 and stores that contract in the blockchain, it only executes if the condition of the transaction is met.

Hence your NFT is stored in your digital cryptocurrency wallet and it is as safe as your crypto currency. You can buy and sell your NFT using your crypto wallet.

It might make things a bit complicated, but if the owner wants then they can mint multiple NFT of the same artwork, it is totally up to the owner’s intention. As we know so far, each NFT will have its unique place in the blockchain and of course this is what makes them original and hard to replicate fully.

For example, if you designed a t-shirt and want to sell only 10 of them then each t-shirt will be more valuable. If you desire to mass produce the item then the value will decrease and people will start choosing other t-shirts. NFT is about the rarity of that item, people who create NFT and sell it know this, so they very carefully think of the NFT marketing strategy before minting it.

Sometimes, NFT artists release a collection of multiple items where each item has a different characteristic, for example CryptoPunk or Bored Ape Yacht Club. Sometimes, the NFT artist decides to mint the same artwork multiple times. You are the person who decides what you want to buy.

It is a well known fact that a transaction of NFT in blockchain doesn’t guarantee the transfer of  underlying physical copyright of the artifact. It depends upon the owner of the NFT and the artwork if he wants to sell the NFT only or the copyright associated with it as well. You as a buyer have to do the due diligence before buying it. We can safely assume that the copyright belongs to the original owner if it is not explicitly specified on the NFT details.

For example, on July 1, 2021, Larva Labs submitted a DMCA (Digital Millennium Copyright Act) request to Foundation (an NFT Platform) to takedown the CryptoPunk work offered by Ryder Ripps as their own work even though Ryder Ripps has bought multiple CryptoPunk worth millions.

We can categorize an NFT as a copy or derivation of original artwork as per 17 U.S. Code § 101.

A “derivative work” is a work based upon one or more preexisting works, such as a translation, musical arrangement, dramatization, fictionalization, motion picture version, sound recording, art reproduction, abridgment, condensation, or any other form in which a work may be recast, transformed, or adapted. A work consisting of editorial revisions, annotations, elaborations, or other modifications which, as a whole, represent an original work of authorship, is a “derivative work”.

This is absolutely illegal and the people who impersonate someone else online and download the copyrighted material online to create and sell NFT are scammers, beware of them.

Apart from those cheap scammer, there have been some high profile copyright lawsuits as well

You can copy an image just by taking a screenshot or saving it to your computer but copying an NFT is impossible because they reside in a blockchain. You can buy a NFT but it does not guarantee the transfer of copyright of NFT and the copyright belongs to the author. If you just want to share an image on twitter you don’t have to care about the copyright or the NFT. As long as these points are clear to you there is no problem in roaming around the NFT world.

2 thoughts on “Can NFT be Copied? Detailed Clarification”